Extraordinary impact of Press Conference on SimVis on television and media

First validation of the simulation of commercial intraocular lenses by SimVis, published in Scientific Reports 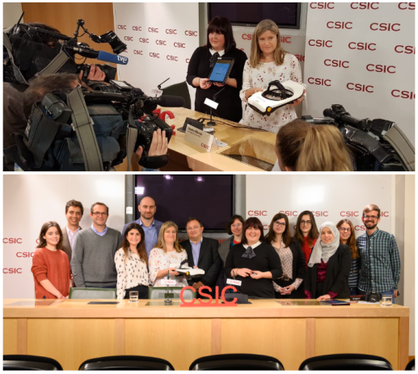 CSIC and VioBio Lab have presented the validation and launch of SimVis in a press conference that took place last February 7th at CSIC.

Thanks to SimVis, developed by researchers from the VioBio Lab (CSIC), patients and surgeons have the possibility of seeing the effects of an intraocular multifocal lens realistically before the implantation. This revolutionary concept caught the interest of several media, including Spanish public television (RTVE)

“Visual simulators are an ideal technique to provide patients with a realistic experience of multifocality before the implantation of an intraocular lens. In addition, since the device has been reduced in size and has a more practical design than those currently in the market, the benefits multiply, ” Prof. Marcos concluded during the press conference.

The technology has led to four patents (one of them received the Best Patent of the Year Award from the Madrid+d Foundation) licensed to 2Eyes Vision, a spin-off company from CSIC, funded, among others, by several of the researchers involved in the development of SimVis.

More information about the press conference in the following links:

39th Congress of the ESCRS

Director of Business Development at 2EyesVision, Álvaro Sánchez-Lozano, talks about the SimVis Gekko and his experience as an entrepreneur